This well knowns conversion process (calcination, thermal leaching & bicarbonization & crystallization) from Spodumene concentrate to lithium carbonate showed extremely good results with extraction rates of 88.4% with very high purity of lithium carbonate of 99.9%. This extraction rate surpasses the worldwide average of between 70 to 75% in what is accepted as an industry standard.

Purity of 99.9% was reached and the impurity profile is outstanding with levels of sodium below 100 ppm, calcium below 200 ppm, iron below 20 ppm and heavy metals below 5 ppm.

These results demonstrated that Critical Elements approach to the lithium carbonate processing plant has been validated and do not require any additional cost intensive purification steps. The diagram below illustrates the Critical Elements process flow: 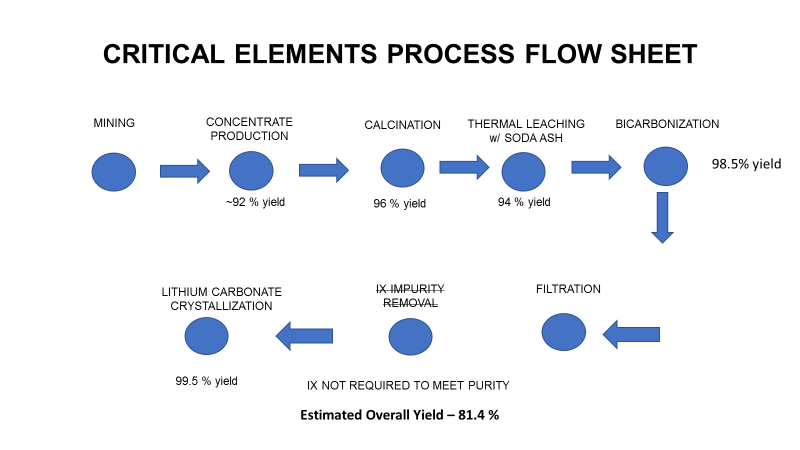 “This supports the low impurity profile of our ore allows us the production of lithium carbonate battery quality at competitive costs without additional purification steps” said Jean-Sébastien Lavallée, Chairman and CEO of Critical Elements.

As supported by these tests, and by choosing this technology (i.e. Thermal Leaching Process) Critical Elements has demonstrated their technological leadership, which will result in a superior product at the lowest possible cost.

• During 8 hour shift the following tasks are done

• Leach residue filtration and washing (Sample from BC WW, residue to PSD analysis)

• Polishing filtration of the filtrate (Sample from T1)

• Caustification (Sample from pHR and T2)

• Li2CO3 washing is done once a day

To date Critical Elements has completed the following testing and piloting work:

This is shown graphically below: 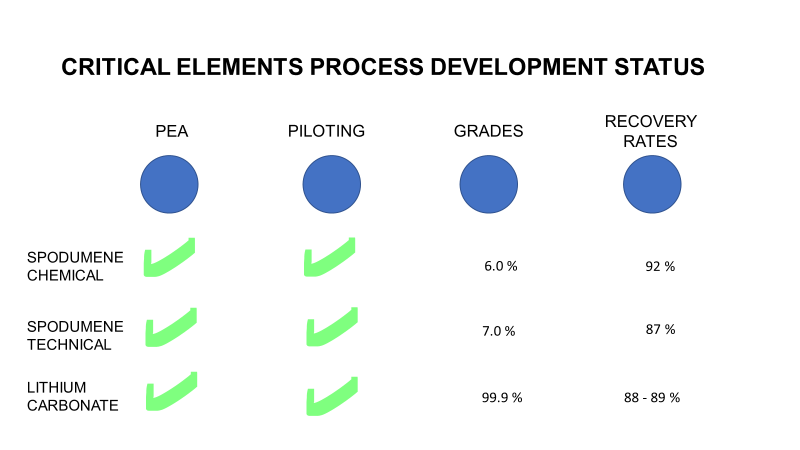 Based on the results of the above work and modelling conducted by Outotec, Critical Elements believes that the overall total recovery rate should approach 81% which compares very favorably to industry standards which are typically in the low to mid 60’s.

This recovery is based on the following:

Outotec is a leading technology company in multiple mining and extraction industries, including the lithium industry, with sites in Frankfurt, Germany and Pori, Finland, as well as other locations.

Jean-Sébastien Lavallée (OGQ #773), geologist, shareholder and Chairman and Chief Executive Officer of the Company and a Qualified Person under NI 43-101, has reviewed and approved the technical content of this release.