This page is currently under maintenance. Please come back soon for more information.

The Nisk property is composed of two blocks totaling 90 claims covering an area of 45.9 km2 and a length of over 20 km. The Route du Nord from Chibougamau runs inside the south border of the Property. Nisk-1 is also traversed in a NE direction by a Hydro-Québec power line and a road that heads north to the Eastmain River and beyond to the La Grande River area.

These rocks are highly sheared and cut by 20% late granitoids (leucogranite and biotite pegmatite). 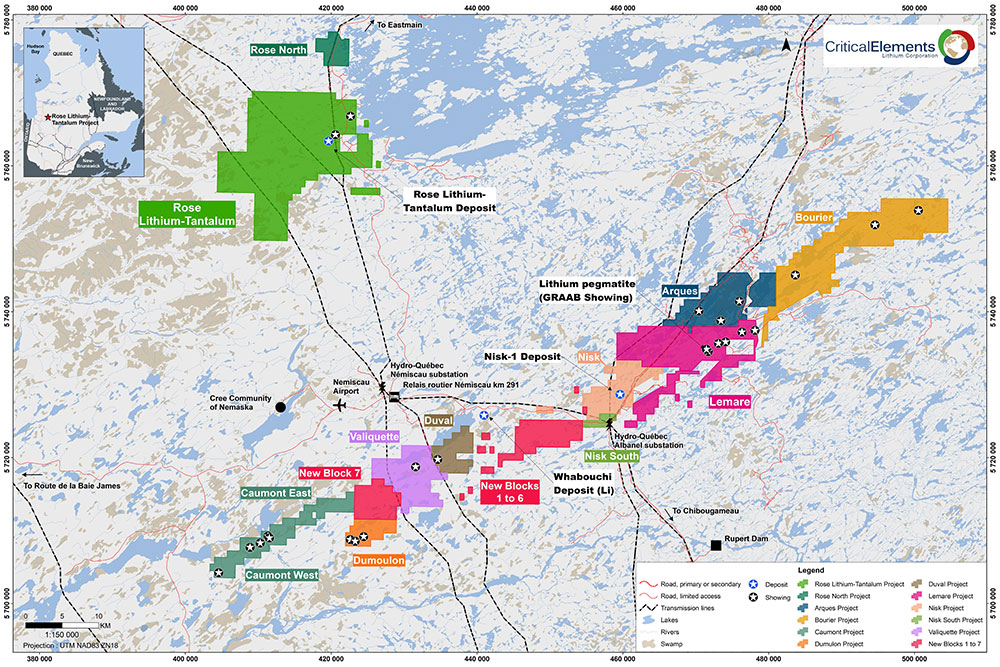 On December 22, 2020, the Company signed an agreement with Chilean Metals Inc. (“Chilean”) to option up to 80% of the Nisk nickel-copper-PGE project (the “Property” or "Nisk-1"), in Quebec’s Eeyou Istchee James Bay territory in Quebec.

The Company grants to Chilean the exclusive right and option to acquire, on or before the date that is three (3) years from the TSX.V approval, an initial 50% Earned Interest in the Property. In order to acquire this interest, Chilean must:

Subject to Chilean having exercised the First Option, the Company hereby also grants to the Optionee the exclusive right and option to increase its Earned Interest in and to the Property from 50% to 80% by incurring or funding additional Work Expenditures for an amount of $2,200,000, including the delivery of a Resource Estimate, for a period commencing on the delivery of the First Option Exercise Notice and ending on the date that is four (4) years from Effective Date.

Following the exercise of the Second Option, until such time as a definitive Feasibility Study regarding extraction and production activities on the Property is delivered to the Joint Venture, Critical Elements shall maintain a 20% non-dilutive interest in the Joint Venture and shall not contribute to any Joint Venture costs.

Following the exercise of the First Option by Chilean, and in addition to the obligations of Chilean under the First and Second Option, if applicable, Critical Elements shall receive, in the event of a Lithium discovery, a royalty equal to 2% net smelter returns resulting from the extraction and production of Lithium products, including Lithium ore, concentrate and chemical, resulting from the extraction and production activities on the Property, including transformation into chemical products. Chilean shall have the right at any time to purchase 50% of the Royalty and thereby reduce the Royalty to 1% by paying to Critical Elements a total cash amount of $2,000,000.

In the event of a Lithium discovery, Critical Elements will retain Lithium Marketing Rights meaning the exclusive right of Critical Elements to market and act as selling agent for any and all Lithium products, including Lithium ore, concentrate and chemical, resulting from the extraction and production activities on the Property, including transformation into chemical products.