April 1, 2016 – Montreal, Quebec – Critical Elements Corporation (“Critical Elements” or the “Company”) (TSX-V: CRE) (US OTCQX: CRECF) (FSE: F12). The management team and Board of Directors at Critical Elements would like to congratulate Elon Musk and the Tesla team for bringing the electric car to the mass market with style, sophistication and elegance.

Jean-Sebastien Lavallée, President and CEO of the Company stated:  “The Tesla Model 3 launched on March 31, 2016, is what the electric car market needs to reach mass adoption in the consumer market. The auto industry now has a clear benchmark and standard for a low-cost, high-volume electric vehicle.” Mr. Lavallée added that: “The mass adoption that may potentially be engendered by the success of the Tesla Model 3 could, in our opinion, completely change the automotive industry landscape and consumer behaviour in the next five years. Critical Elements believes that by 2020, the electric car will no longer be a trend, it will be a transportation standard.”

A February 25, 2016, study conducted and published by Bloomberg New Energy Finance forecasts that: Sales of electric vehicles will hit $41 million by 2040, representing 35% of new light duty vehicle sales. This would be almost 90 times the equivalent figure for 2015, when EV sales are estimated to have been 462,000, some 60% up on 2014. (Source: Bloomberg)

Moreover, Bloomberg New Energy Finance found that there has been a significant drop in the cost of the Lithium-ion battery, as the chart below demonstrates. The cost per kilowatt/hour has come down from approximately US$ 1,000 in 2010 to approximately $400 by year-end 2015. (Source: Bloomberg).  Critical Elements believes that cost reduction trend will continue, and that the Rose Lithium-Tantalum Project could be a key element in the global supply chain of lithium for battery usage. 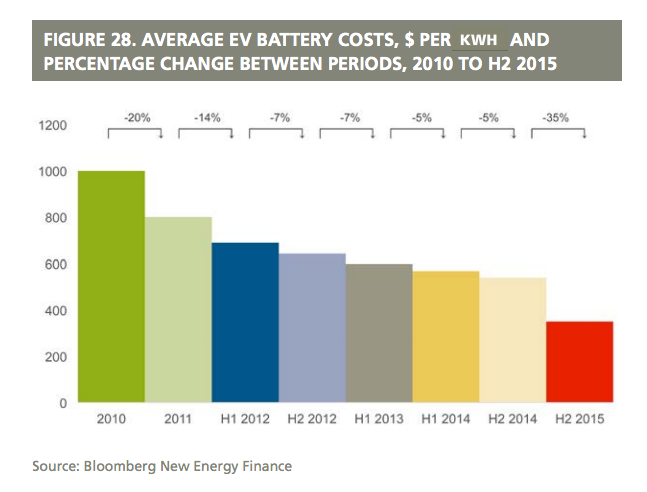 A recent financial analysis (Technical Report and Preliminary Economic Assessment (PEA) on the Rose lithium-Tantalum Project, Genivar, December 2011) of the Rose project based on price forecasts of US$260/kg ($118/lb) for Ta2O5 contained in a tantalite concentrate and US$6,000/t for lithium carbonate (Li2CO3) showed an estimated after-tax Internal Rate of Return (IRR) of 25% for the Rose project, with an estimated Net Present Value (NPV) of CA$279 million at an 8% discount rate. The payback period is estimated at 4.1 years. The pre-tax IRR is estimated at 33% and the NPV at $488 million at a discount rate of 8%. (Mineral resources are not mineral reserves and do not have demonstrated economic viability). (The preliminary economic assessment is preliminary in nature).  (See press release dated November 21, 2011.)